Earlier this month, Jake Cohen’s brand new cookbook Jew-ish: A Cookbook: Reinvented Recipes from a Modern Mensch came out and it is a must-have addition for anyone’s kitchen. Not only does Cohen reinvent recipes tied to his Ashkenazi heritage, but he infuses his creations with traditions from his husband’s Persian-Iraqi traditions to create a fresh twist on familiar recipes.

Jew-ish: A Cookbook is a 5-Star Collection of Recipes

I was initially overwhelmed as I flipped through Jew-ish because I wanted to eat everything I saw. Cohen has created a visual masterpiece, brightly colored designs paired with vibrant delicacies artfully plated up. Throughout the book, he offers autobiographical insights into his life as it relates to food and thoroughly explains customs and meanings behind food for the goy who might pick-up Jew-ish. 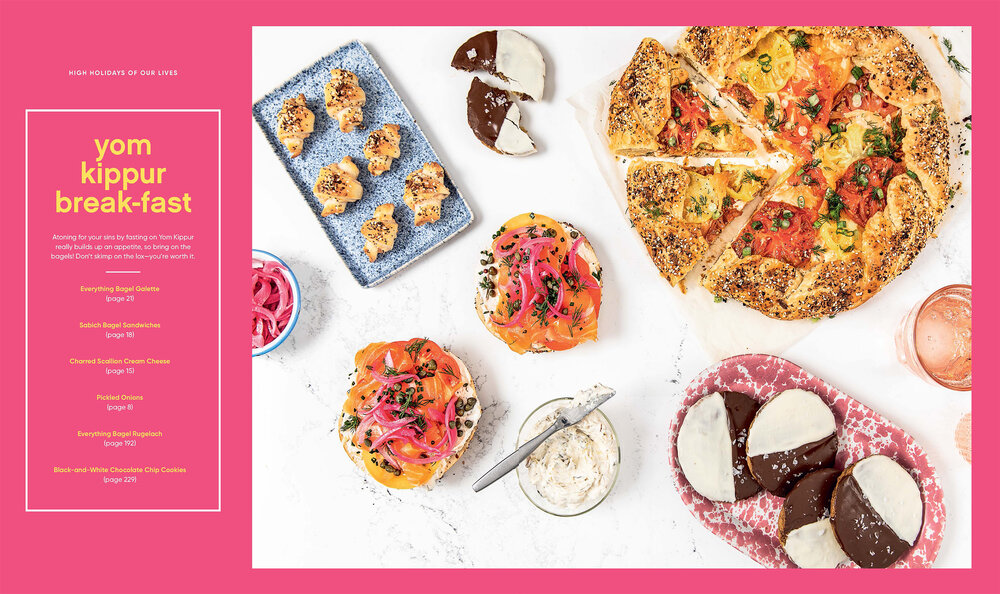 I have been dying to try my hand at making kugel ever since my local grocery store stopped carrying it, and Cohen’s Spinach-Artichoke Kugel recipe did not disappoint. The step-by-step instructions were easy to follow. Since I had no need to make a dish big enough for 10-12 servings, I cut the recipe in half and had more than enough for dinner and lunch leftovers.

It was rich and delicious and I cannot wait to try the Cardamom-Spiced Pear Noodle Kugel next.

On another day, I followed Cohen’s advice for making the perfect bagel and he didn’t lead me wrong. An everything bagel paired with cream cheese, red onions, tomatoes, and of course smoked salmon. It makes for a delicious breakfast and an even more delicious lunch. The next thing I’m keen to make is Cohen’s very different twist on bagel and lox — an Everything Bagel Galette.

While my plated-up Roasted Garlic Hummus tray pales in comparison to the artful creation featured in Jew-ish, you won’t want to miss out on trying your hand at making homemade hummus.

Overall Jew-ish is a cookbook that is clearly aimed at the millennial kitchen and it succeeds at every turn of the page. The recipes are easy to follow and they turn out as-pictured, the ingredients are easy enough to find, and nothing you’ll need for the recipes is going to break the bank. The only crime committed by the book is the fact that Cohen failed to include the recipe for the delicious marbled hamentashen he shared on TikTok.

You can pick-up Jew-ish: A Cookbook in stores now.

A Quick Guide to Netflix’s Shadow and Bone